Summers on the Fed's Toolbox

Larry Summers posted an excellent blog entry today, titled The Fed’s complacency about its current toolbox is unwarranted. The central message is clear from this title, but it's well worth considering his arguments in some detail, as they help clarify some of the market implications of upcoming policy decisions.

The crux of Summers' argument is a refutation of the most influential paper at Jackson Hole that wasn't on the agenda -- David Reifschneider's aptly titled, Gauging the Ability of the FOMC to Respond to Future Recessions, upon which Yellen drew heavily in her Jackson Hole speech, The Federal Reserve's Monetary Policy Toolkit: Past, Present, and Future. In general, Summers takes strong issue with Reifschneider's conclusion (shared by Yellen) that the Fed has ample tools with which to address the next recession. More specifically, he offers five specific critiques worth considering.

Summers' first critique is a response to Reifschneider's reliance on the Fed's FRB/US model rather than on empirical observation of the actual economy. In particular Summers advises:


"distrust conclusions reached primarily on the basis of model results.  Models are estimated or parameterized on the basis of historical data.  They can be expected to go wrong whenever the world changes in important ways."

I've made this point repeatedly myself and believe Summers' concern is appropriate in this case.

Summers' third critique is that Reifschneider is too dismissive of his finding that Fed policy will not fare as well given the zero lower bound under the assumption that the Fed will adopt an optimal control policy rather than a Taylor-style rule. While this is an interesting point, it's quite technical, and the Fed hasn't made any clear announcements that it's following an optimal control policy.

I have considerable sympathy with Summers' fourth critique:


"I suspect that prevailing views at the Fed about the efficacy of QE and forward guidance substantially exaggerate their likely impact. I don’t think the Fed has taken on board the lesson of the three year period since QE ended.  If longer term rates had risen after QE and forward guidance ended, this would surely have been taken as further evidence of their potency.  It follows that the fact that term spreads have fallen substantially since the end of unconventional policy ... should lead to more skepticism about their efficacy."

Again, I've made this point repeatedly, including in a recent blog post, Yellen at Jackson Hole. But Summers makes an additional, insightful observation about the net effects of QE, increased issuance by the Treasury, and the skewing of issuance toward longer maturities. In particular, Summers refers to work he published as a Brookings paper with Robin Greenwood, George Gund, Samuel Hanson, and Joshua Rudolph: Government Debt Management at the Zero Lower Bound, in which the authors report, "when measured in 10-year equivalents, the combined effect of maturity extension and the increased debt stock far outpace QE." Panel A of Figure 1 in that paper illustrates the point clearly. 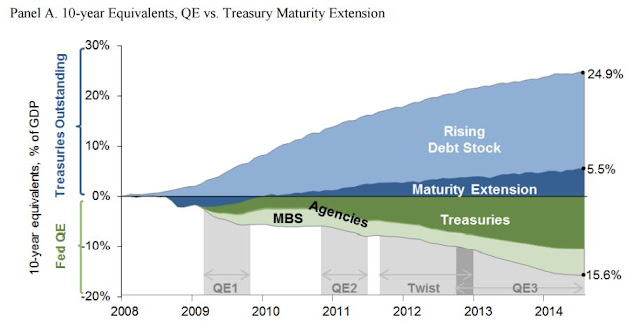 In his blog post, Summers explains the implications succinctly.


"On the issue of QE Greenwood, Hanson, Rudolph and I show that the contrary to much of the discussion during the QE period the stock of longer term public debt that the market has to absorb went up not down.  The amount of longer term Federal debt that markets have to absorb is now as high as it has been in the last 50 years and long rates are extraordinarily low, as are term spreads.  This calls into question the idea that price pressures caused by changing relative supplies are likely to have large impacts at times like the present when markets are functioning."

Fifth, Summers questions Reifschneider's assumption regarding the potential decline in long-term rates with the onset of the next recession. In fact, it's worth quoting Summers at some length to appreciate the strength of his concern on this point.


"Reifschneider in his very careful paper shows that with a big recession rates would likely approach -6 percent, or even -9 percent, but for the zero lower bound.  I find the idea that forward guidance and QE could do the anything like the work of 600, let alone 900, basis points of rate cutting close to absurd.  Both QE and forward guidance are said to work by bringing down longer term rates.  The 10 year Treasury is now in the 1.6 percent range.  If the Fed returned Fed Funds to its lower bound level in the context of a recession, I would expect to see 10 year rates fall substantially perhaps to 1 percent without any QE or forward guidance.   How much room is there for unconventional policy to bring them down further?  Reifschneider ‘s assumption that there will be room for unconventional policy to bring down 10 year rates by hundreds of basis points seems to me very doubtful."

Again, I find Summers' argument persuasive on this count.

So what are the market implications of Summers' critique?

First, I suspect there's quite a reasonable chance that Hillary Clinton will win the upcoming election and that she'll appoint Summers to one of the open seats on the Federal Reserve Board of Governors. I also believe there's a good chance she subsequently would appoint Summers as Chairman when Yellen's term expires in February, 2018. And based on his writings in recent years, I believe he would be more creative and provide a greater degree of effective stimulus than his predecessor. In fact, I suspect the Fed's toolbox would be expanded even further under Summers -- but we can look forward to hearing more about his thoughts on that subject in Summers' next blog post. In any case, I believe market-based measures of inflation compensation would be at least 50 bp higher under Summers than they are currently. In fact, this may be a conservative estimate, as these measures are currently well below the averages seen in previous years.

Second, as I mentioned in my Yellen at Jackson Hole post, "if the Fed is willing only to use relatively conservative policy tools during the next downturn, we might expect the dollar to strengthen, ceteris paribus, at least relative to central banks that are willing to take relatively more activist policy measures." Summers' critique appears entirely consistent with that view.

Third, I believe many FOMC members are sympathetic to Summers' general concern, even if they don't agree with all his specific points. In particular, I've argued in Is the US Near Maximum Employment? that the FOMC is aware of the importance of raising the policy rate sufficiently ahead of the next recession. More specifically, speaking of FOMC members, I concluded:


"...for now, I suspect they'll increase the policy rate at a moderate pace, but with sufficient deliberation to avoid getting caught by the next recession with the rate still close to zero. More specifically, they may not manage to raise the IOER quickly enough to fulfill the expectations in the last dot plot -- or in Yellen's Jackson Hole fan chart. But I wouldn't be surprised if they managed to raise the policy rate somewhat more than is currently priced into the market."

Of course, this prediction runs counter to the advice of Summers, who would prefer a more stimulative monetary policy in conjunction with renewed fiscal stimulus. But while Summers' perspective is normative, mine is positive -- and it would appear we have a few more years yet before Summers assumes the Chair of the FOMC.