Is the US Near Maximum Employment?

Many of the recent comments from FOMC members suggest a desire to increase the IOER by another 25 bp before the end of the year, given favorable developments in the US labor market and recent progress in returning the inflation rate to the 2% goal.

The statistic most frequently cited to support the view that the labor market is near full employment (or maximum employment, as specified by the Federal Reserve Act), is the unemployment rate, currently at 4.9%. And as shown in the graph below, this rate appears consistent with the notion that that US employment is fairly 'full', even if it's not reached a maximum.

On the other hand, skeptics often note that the labor force participation rate has been declining, to 62.8% currently, down from 67.3% in the first half of 2000, suggesting a pool of available labor may be available to rejoin the labor force in the event labor demand increases further.

This last argument is often rebutted by referring to demographic changes over time, primarily those relating to age and gender given the post-war demographic bulge and the trend increase in the female participation rate throughout the latter half of the 20th century.

In an attempt to control for these changes, we show the percentage of men aged 25 to 54 who were employed over time (determined by combining various series from the Bureau of Labor Statistics). 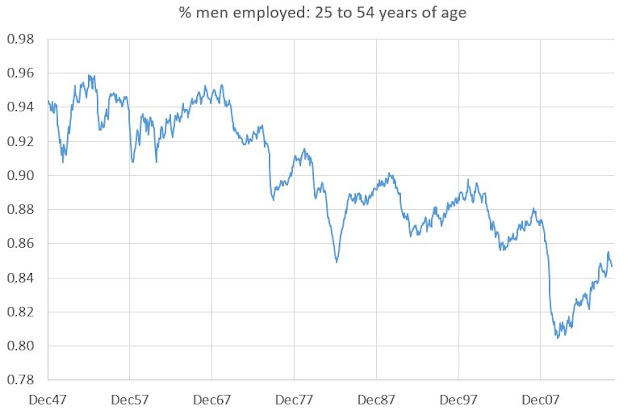 There are three points particularly worth noting in this graph:

In other words, whether we consider the labor force participation rate for the entire population, or we attempt to control for changing demographics, we get the sense that the labor force could increase in size by roughly five percentage points (ie, an increase in employment closer to 6% greater than current levels) before employment should be considered to be at 'maximum' -- at least if history is any guide.

A variety of factors appear to be contributing to these trends, but two particularly interesting aspects are cited in a recent White House discussion paper, titled The Long-term Decline in Prime-Age Male Labor Force Participation.

The first graph below shows labor force trends by birth cohort. Note that in addition to the standard decline with age, we see a decline over time -- ie, each cohort has a lower participation rate than the previous cohort, even controlling for age. 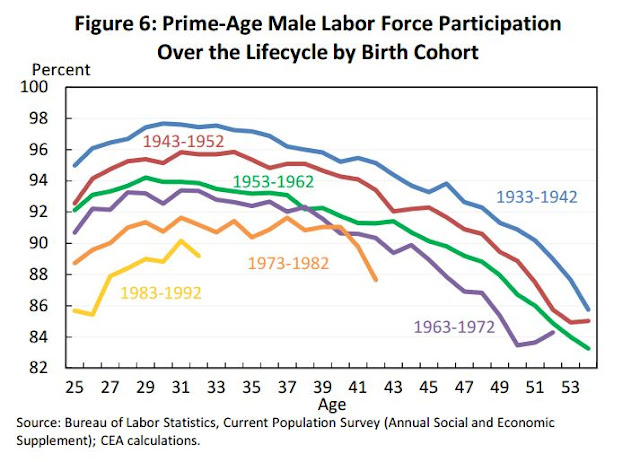 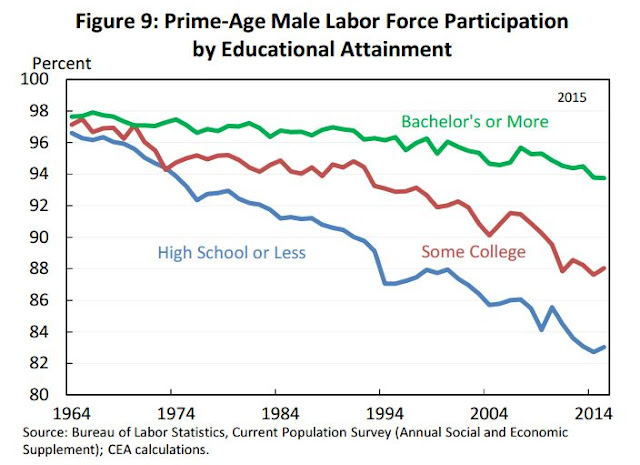 Taken together, these graphs are consistent with scenarios in which increased global competition over time among workers with less education results in wage pressures that motivate an increasing number of men in these cohorts to exit the labor force. While this interpretation also is consistent with many documented wages trends, I mean it only to be suggestive in this case, as my argument here doesn't rely on the specific mechanism responsible for the declines in labor participation rates. Rather, my argument is that the pool of available labor in the US is larger than one might infer simply by referencing the headline unemployment rate.

But if FOMC members are generally aware of these issues with the labor force participation rate, why are so many set on raising the policy rate at the moment, especially when inflation has been below target for such an extended period and when wage gains have been fairly disappointing for so many for so long?

My sense is that FOMC members are confronted with political considerations in additional to economic considerations. If FOMC members don't manage to increase the IOER much further before the onset of the next recession, members will have little scope to reduce the policy rate in response, particularly if they wish to avoid negative policy rates, as Yellen noted at Jackson Hole.

Yet FOMC members are certain to feel pressure to act forcefully during the next recession. And if there's little scope for reducing the policy rate, pressure will increase to take other measures, such as widening the scope of assets purchased as part of an expanded LSAP program. Even a forceful formulation of forward guidance would pose unwanted risks for the Fed, as Yellen outlined at Jackson Hole. And it's clear that the Fed has no intention -- or legal means -- of engaging in outright monetary financing. So engineering a material increase in the IOER would give FOMC members space to react to the next recession in a way that would soften political pressures that otherwise could be exerted.

So I expect that policy decisions will in fact be data dependent (including a dependence on financial market data). And I suspect quite a number of FOMC members otherwise would like to indulge a bias toward allowing the labor market to build strength sufficient to see an increase in real wages and perhaps even in unit labor costs. And perhaps they'll have a greater chance to indulge this tendency provided the expansion continues long enough and with enough vigor for the FOMC to increase the policy rate comfortably off the zero lower bound.

But for now, I suspect they'll increase the policy rate at a moderate pace, but with sufficient deliberation to avoid getting caught by the next recession with the rate still close to zero. More specifically, They may not manage to raise the IOER quickly enough to fulfill the expectations in the last dot plot -- or in Yellen's Jackson Hole fan chart. But I wouldn't be surprised if they managed to raise the policy rate somewhat more than is currently priced into the market, shown with the FOMC dots below. [Source: Bloomberg]