The headline quote from Yellen's Jackson Hole speech was


"... in light of the continued solid performance of the labor market and our outlook for economic activity and inflation, I believe the case for an increase in the federal funds rate has strengthened in recent months."

Though it's also worth noting the caveat that followed:

"Of course, our decisions always depend on the degree to which incoming data continues to confirm the Committee's outlook."

Combining Yellen's comment with recent comments from other FOMC members, the overall impression is that the policy rate is likely to increase by another 25 bp at either the meeting ending September 21 or the one ending December 14.

But the main point of Yellen's speech, titled "The Federal Reserve's Monetary Policy Toolkit: Past, Present, and Future", is to consider future policy frameworks, consistent with the theme of this year's symposium, "Designing Resilient Monetary Policy Frameworks for the Future."

In this regard, perhaps the most informative aspect of Yellen's speech was the inclusion of a fan chart for future policy rates. 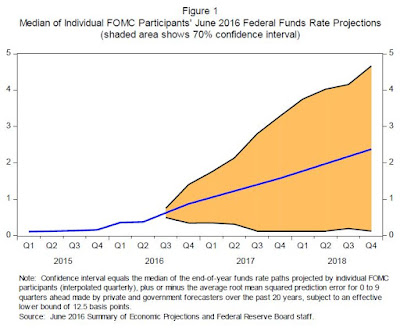 Yellen's fan chart should be viewed in the context of changes in the framework suggested by other FOMC members. For example, Jim Bullard recently announced a new analytic framework to be used by the St Louis Fed, in which policy is made for the current regime, which is presumed to prevail indefinitely, without any attempt to identify probabilities for shifts to other regimes. In a related blog post, Demise of the Dots, I wrote:

"Bullard has a point in noting that actual market outcomes have been well below the FOMC projections since the advent of the dot plots. As FOMC communication policy continues to evolve, it's not hard to imagine the dots being replaced with something relying less on point estimates, such as the repo rate fan charts provided by the Riksbank."

In this sense, Yellen's fan chart can be seen as a response to the critiques of Bullard and others that the dot plots have failed systematically to forecast actual outcomes or, apparently, to influence market pricing. With Yellen's speech, I suspect the days of the dots are numbered, to be replaced by the fan chart, which has long become a standard communication tool among a number of central banks.

This particular fan chart is notable for two other characteristics  First, the width of the fan is a function of the root mean square prediction error of private and government forecasters over the past twenty years. In other words, the width of this fan chart is not necessarily an indication of the current forecast uncertainty in the minds of Yellen or of her colleagues on the FOMC. Of course, it could be that their best guess of the current forecast uncertainty is equal to the prediction error over the past twenty years – but that certainly need not be the case. For example, the forecast uncertainty could come from a calibrated DSGE model instead, In this case, Yellen seems merely to be clarifying that there is a considerable degree of uncertainty around policy rate forecasts in general rather than characterizing the degree of uncertainty that she believes characterizes this particular forecast.

Second, the fan chart is constructed so that there is no probability mass whatsoever lower than 0.125%. In other words, Yellen is offering an explicit view that the policy rate will not become negative. Again, she needn’t have made this choice. She could have made the fan chart symmetric around the central values, in which case a nontrivial probability would be associated with negative policy rates. As a result, we have yet another clear example of Yellen explicitly steering us away from negative rate scenarios.

In the same context, it’s also worth noting that in the text of the speech Yellen refers to the zero lower bound rather than to the effective lower bound, a term used for example by Benoît Cœuré in his remarks, Again, we get a clear indication that Yellen does not wish to introduce negative interest rates into the mix of potential policies actively being considered.

To the extent Yellen is successful in further reducing the perceived, subjective probabilities of negative rate scenarios in future Fed policy, this should impart a slight upward bias toward higher rates along the yield curve (assuming such a reduction has no effect on term premia along the yield curve, due for example from further QE). For the same reason, such a reduction would be expected to impart a slight upward bias in the dollar, in particular relative to currencies in which policy rates are currently negative or in which there is a realistic prospect of negative policy rates in the future.

This effect should be modest given that Yellen has previously steered market participants away from consideration of negative policy rates in the past. But it's worth keeping in mind as the policy debate progresses.

One of the reasons Yellen has been able to avoid entertaining the possibility of negative nominal policy rates is that she's been relying fairly heavily on forward guidance and large-scale asset purchases. However, my sense is that trust in these tools may be somewhat misplaced.

Like her colleagues, Yellen frequently cites the effectiveness of large-scale asset purchases at stimulating the economy and boosting inflation above the level it would have been without such purchases. I've long been skeptical of these arguments (see, for example, my blog post of April, 2009, How Easy is Quantitative Easing?). But for now I'll simply direct readers to the large body of work questioning QE, starting with The Central-Bank Balance Sheet as an Instrument of Monetary Policy by Woodford and Cúrdia, from which I quote:

"We have found that explicitly modeling the role of the central-bank balance sheet in equilibrium determination need not imply any role for “quantitative easing” as an additional tool of stabilization policy, even when the zero lower bound on the policy rate is reached. While different results might be obtained under alternative theoretical assumptions, our reading of the Bank of Japan’s experience with quantitative easing leads us to suspect that our theoretical irrelevance result is likely close to the truth."

Michael Woodford also has useful observations regarding forward guidance, which I discuss in a recent blog post, Fischer on Woodford on Forward Guidance. As summarized by Stanley Fischer:

"...optimal forward guidance should commit to maintain lower interest rates during the recovery than would otherwise have been warranted by economic conditions. Importantly, the appropriate commitment can be framed as a history dependent policy function responding only to the history of the price level and the output gap, in such a way that the impact on policy decisions of economic conditions at the lower bound continue, even as the economy recovers."

In contrast, it's worth quoting from Yellens' Jackson Hole speech on this subject.

"...if future policymakers responded to a severe recession by announcing their intention to keep the federal funds rate near zero for a very long time after the economy had substantially recovered and followed through on that guidance, then they might inadvertently encourage excessive risk-taking and so undermine financial stability."

"The Committee intends at a minimum to maintain the current highly stimulative stance of monetary policy until economic slack has been substantially reduced, provided this does not entail material risks to either price stability or to financial stability."

The MPC then listed three knockout conditions that would free it from this forward commitment, each of which involved the subjective judgment of policy makers.

Unless Yellen and her colleagues on the FOMC are willing to commit along the lines outlined by Fischer and Woodford, we shouldn't expect forward guidance to be a particularly effective tool in the Fed's arsenal going forward.

If Yellen eschews more activist monetary approaches, such as negative nominal policy rates and monetary financing (helicopter drops), if the effectiveness of QE is questionable (or at least waning), and if her variant of forward guidance is unlikely to make a commitment any less conditional than her previous commitments, what, if anything, can we conclude about policy in the years ahead?

Market-based measures of inflation compensation are already low relative to historical values. For example, the 10Y breakeven inflation rate in the US is currently, just under 1.50% -- more than 50 bp below the average over the past five years. Similarly, the 5Y5Y inflation swap rate is just under 2.0% -- 60 bp below its five-year average and 90 bp below the ten-year average of 2.9% from July 2004 through July 2014.

When the US economy next enters a recession, my expectation is that QE and the Fed's version of forward guidance are unlikely to boost these rates materially. And while I'm not forecasting the date by which the next recession is likely to start, I'd be somewhat surprised if these market-based measures of inflation have increased by 50 bp by then.

Likewise, if the Fed is willing only to use relatively conservative policy tools during the next downturn, we might expect the dollar to strengthen, ceteris paribus, at least relative to central banks that are willing to take relatively more activist policy measures.

Of course, a lot can change  between now and the onset of the next recession in the US, including the Fed Chair and the composition of the FOMC. But for now we have a clear sense that Yellen has a decided preference for the more modest of the recent policy innovations among central banks, with consequent implications for market pricing.