Fresh from Jackson Hole, Stanley Fischer appeared on Bloomberg yesterday. Notable was this exchange with Tom Keene [emphasis mine]:

SF: "Well, clearly there are different responses to negative rates. If you're a saver, they're very difficult to deal with and to accept, although typically they go along with quite decent equity prices. But we consider all that and we have to make trade-offs in economics all the time and the idea is the lower the interest rate the better it is for investors."

I suspect Keene is too much of a gentlemen to call Fischer on that response, so I'll note that Fischer's response is trivially true of the price of most any asset that can be valued via discounted cash flows.

For example, the graph below shows the price of a US principal STRIP maturing in February 2036, along with the level of the S&P 500 over the past three years. 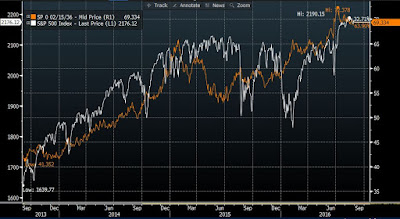 I'm not suggesting one can or should build an equity valuation model based on STRIPs prices. And the simple regression I've suggested is fraught will all sorts of econometric problems. But it highlights the underlying vacuity of Fischer's comment. For example, if Fischer had observed that negative policy rates "go along quite decent" with zero coupon bond prices, presumably even a gentleman like Keene would raise an eyebrow.

Fischer clearly knows better. But he does us all a disservice by answering an important question with a fairly trite answer. Nobody saving for retirement in 2036 should feel any better if the price of our zero coupon bond increases more quickly than would be expected given an assumption of constant yields, since the capital gains on the existing position will be precisely offset by the lower expected return of the position going forward. And unless expected corporate profits are increasing, nobody investing in S&P 500 stocks with an investment horizon date of 2036 should feel particularly pleased with higher stock prices. (I'm assuming no change in risk preferences, equity risk premia, etc.)

Have the extraordinary measures of central bankers been increasing corporate profits? The graph below shows that natural log of US corporate profits, with adjustment for inventory valuation and capital consumption, since 1947, along with a simple trend line. [Source: Bureau of Economic Analysis] 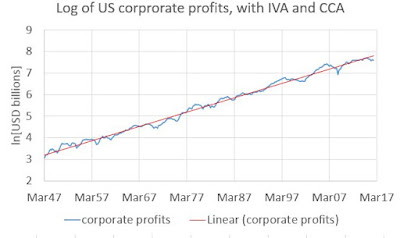 Again, this is a rather crude analysis, but there's nothing here to suggest extraordinary measures have been increasing corporate profits.

If I were an investment adviser with a client who wanted to increase his current consumption because his retirement investment in 2036-maturity STRIPs had increased in value, I'd be guilty of malpractice if I told him this was a good idea. Why is Stanley Fischer suggesting with a smile that negative policy rates "go along with quite decent equity prices"? Tom Keene asked a serious question, We all deserve a serious answer.

My view is that the no central banks exert much influence on expected future returns, which are determined instead by the market-clearing actions of savers and investors. Expected future returns aren't low because central bankers have been keeping policy rates low. Rather, central bankers have been keeping policy rates low because low rates are required these days for there to be any chance that the markets for savings and investment will clear. The real shame in Fischer's answer is that it obfuscates the issue, maintaining an exaggerated impression of the importance of central bankers and creating a false impression in the minds of policy makers and the public that we can enjoy better economic performance without reforms.

And with that in mind, the real issue facing bond market investors in the coming months is not whether FOMC members will choose to hike in September or December -- it's the choice voters make in November, and the potential for more fundamental reform during the 115th US Congress.