Williams v Summers: Half Full or Half Empty?

SF Federal Reserve President Williams last night delivered an interesting speech with the provocative title, Whither Inflation Targeting? A good portion of his speech echoed comments he made a few weeks ago, in Monetary Policy in a Low R-star World -- namely that the Fed could better fulfill its mandate under a modified monetary regime. But some of his comments pertained to the current policy decision and are worth considering further.

Williams starts by addressing employment, noting "a very strong labor market by any standard." Turning to inflation, he notes, "We’re not quite at our target yet, but the combination of fading transitory factors and a strong economy should help us get back to our 2 percent goal in the next year or two." In light of these views, Williams addresses the implication for rate policy, concluding, "...it makes sense to get back to a pace of gradual rate increases, preferably sooner rather than later."

Contrast this with the views Larry Summers included in his comments yesterday. On employment, Summers noted, "Private sector GDP growth for the last year has averaged 1.3 percent a level that has since the 1960s always presaged recession." He continued, "Total work hours have over the last 6 months grown at nearly their slowest rate since early 2010." (I addressed this point in Is the US Near Maximum Employment?) As for inflation, Summers observed, "both market and survey measures of inflation expectations continue to decline."

What accounts for the discrepancy between the views of Williams and Summers? Is this simply a case of the glass being half full or half empty depending on one's perspective?

I believe the divergence in views can be explained in part by the divergence in their motives. As a current FOMC member, Williams shares Yellen's concern that the FOMC may not have sufficient room to reduce the IOER in response to the next recession, in which case the Fed would be subject to political pressure to expand the policy toolkit to include less traditional tools, such as negative interest rates and an expansion of assets available for purchase as part of the Fed's large scale asset purchase program. As we've discussed, various FOMC members appear uncomfortable with such tools -- hence the debate over the existing policy toolkit.

In contrast, I suspect Summers' best prospect for replacing Yellen as Fed Chair when her term expires in February 2018 is for the Fed to come under political pressure , without which there would be political pressure for Yellen's reappointment. More specifically, the Democratic party has moved considerably to the left since Summers was Treasury Secretary, and Summers needs to overcome critics such as Elizabeth Warren, who openly supported Yellen over Summers when the job was last available in 2013. By aggressively advocating a more dovish policy than Yellen, Summers may be positioning himself as an acceptable alternative to Yellen when the job is next available.

To be fair to both men, I suspect both genuinely believe in their respective positions. But people have a tendency to choose their beliefs to suit their interests, and I suspect Williams and Summers are as susceptible to this influence as are the rest of us.

The current incumbents on the FOMC have an interest in raising the policy rate ahead of the next recession to a level that would allow them to mount a sufficient response to the next recession with a combination of lower but positive IOER rates, forward guidance, and perhaps a modest increase in quantitative easing. As a result, I believe they'll make every effort to increase the IOER whenever the data permits -- and this includes financial market data (ie, asset prices). While I suspect the won't be able to hike as much as implied by the latest dot plot (or Yellens' fan chart), I imagine they will be able to hike more quickly than suggested by current market pricing -- particularly with the Oct16 Fed Funds futures contract currently at 99.565.

But in addition to the usual schism between hawks and doves, we're now seeing an increasingly active debate regarding the strategies and tactics with which the Fed pursues its mandate. On one side we have Yellen and David Reifschneider, deputy director of the division of research and statistics at the Board of Governors, who believe the Fed can continue targeting an inflation rate of 2% with its available tools. On the other hand, we have Williams, Olivier Blanchard, and others who believe the Fed should adopt a new strategy (such as a 4% inflation target or a switch to targeting nominal GDP) -- or at a minimum believe the Fed requires new tools, such as negative interest rates, in order to successfully pursue its objectives.

The problem for the market is the uncertainty that this open debate engenders. Williams argues that now is the the time to reconsider these strategies and tactics, given the current performance of the economy. But the market is facing considerable uncertainties already, including a change of administration in the US, Brexit, a constitutional referendum in Italy this November, elections in Germany and France next year, and a review of monetary policy In Japan.

As seen in the graph below, volatility in the rates and equity markets is already low by historical standards. It's difficult to see volatility remaining this low given the events on the calendar -- let alone a reappraisal and reimplementation of monetary policy strategies and tools at the Fed. My sense is that the growing debate over monetary policy at the Fed -- and elsewhere -- will only add to financial market volatility in coming quarters. 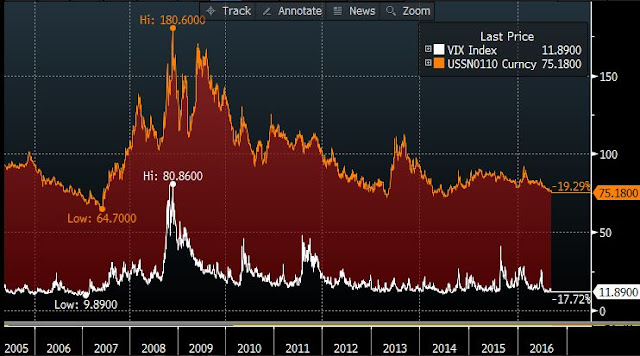