I've been making a similar point lately, though with a slightly different emphasis than the authors of this BIS article. So in this post, I'll highlight some of the more interesting aspects of their article, comment on a few areas in which my perspective differs slightly, and consider implications for the market.

BMMS approximate dollar funding gaps in the banking sectors of eight countries, by subtracting stated dollar liabilities from stated dollar assets on the consolidated, global balance sheets of banks headquartered in each country. They then plot these funding gaps against the basis swap spreads in each currency (against USD), for 3Y tenors. The results are shown in their Graph 3, reproduced here. 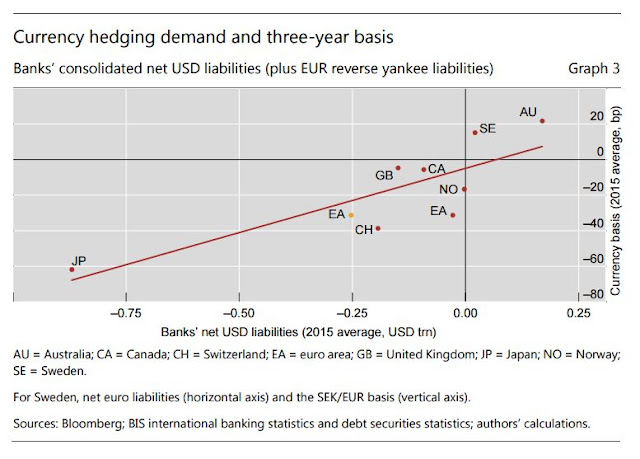 BMMS then compared their estimated funding gap for Japan against the 3Y JPY/USD basis swap spread over time. And, as expected, they observe the expected correlation between the funding gap and the cross currency basis swap over time. 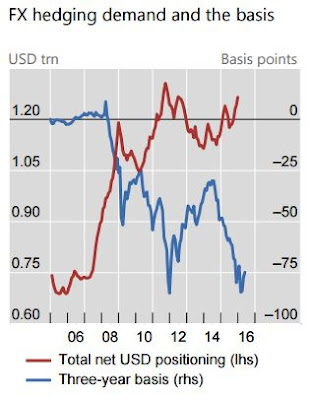 BMMS explanations of these correlations

The authors cite a number of factors thought to be driving these spreads generally:
The QE Perspective

While I don't disagree with these explanations, I tend to emphasize somewhat different aspects -- particularly unintended consequences of quantitative easing.

My sense is that central bank purchases of government bonds in some markets are creating a need for asset replacement on the part of institutional investors and asset managers in these markets, consistent with the portfolio balance channel cited by Bernanke and others since the advent of QE. In some cases, asset managers have been replacing sovereign debt with corporate bonds and even with equities. But another option is for these managers to replace this missing sovereign debt in their domestic market with debt issued by another sovereign in another currency, combined with a cross-currency basis swap, in order to create synthetic sovereign debt denominated in their domestic currency.

In fact, this seems rather natural to me. For example, if I were running a pension fund that sold a 30Y Bund to the ECB, I'd view a 30Y Treasury, swapped into EUR, as a closer replacement for this bond than, say, an equity investment in BMW or Siemens.

The issuance of euro-denominated corporate debt works via a related mechanism. As the ECB creates somewhat of a vacuum in the EUR debt market, issuers like Apple help fill the void by issuing in euros and swapping the proceeds into dollars.

BMMS cite a role played by central banks too. But I tend to give greater emphasis to the direct effect of quantitative easing. For example, rather than ascribing the behavior of asset managers to "strategic hedging", I suggest their behavior is a predictable response to the vacuum created by large-scale central bank purchases.

Does the data support the key role I'm ascribing to QE? I believe it does.

The first chart below shows the percentage of JGBs held by the Bank of Japan, along with the 30Y JPY/USD cross-currency basis swap (shown on an inverted axis). 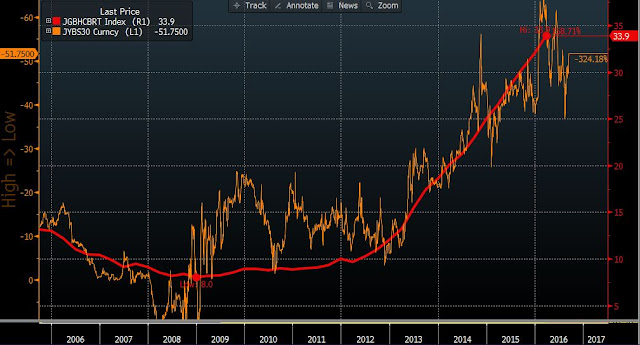 As expected, the 30Y JPY/USD basis swap spread has widened as the Bank of Japan has increased the share of outstanding JGBs on its balance sheet.

The next graph shows the PSPP holdings of the ESCB, along with the 30Y EUR/USD cross-currency basis swap spread, since the start of the PSPP in September of last year. 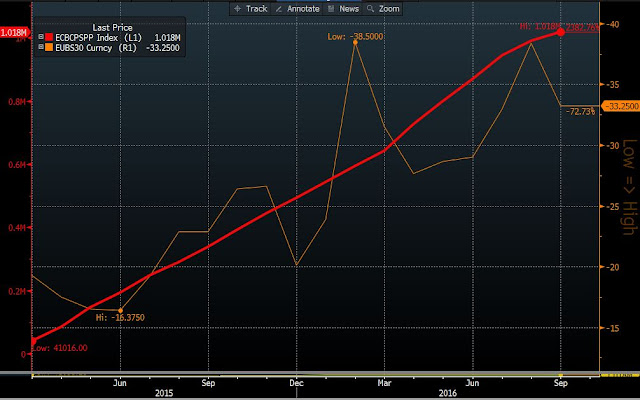 While these correlations don't constitute formal statistical tests, they are consistent with the notion that central bank purchases are creating shortages in domestic markets that are being filled synthetically via foreign sovereigns combined with cross-currency basis swaps.

Of course, the Fed also has purchased a considerable percentage of the Treasury market via its own large scale asset purchase program. Might these purchases be enough to create a similar phenomenon in the US and move the cross-currency basis swap spreads back toward zero?

In theory, I'd agree that this is a possibility. But in practice, I'd make two points. First, the Fed isn't adding to its holdings currently. And second, the Fed holds a smaller percentage of the Treasury market (16%) than the Bank of Japan holds of the JGB market (34%). But were the Fed to engage in further rounds of QE (perhaps in response to the next recession), the changes in relative holdings would be worth watching.

"tighter limits on arbitrage make it harder to narrow the basis whenever it opens up as a result of pressures that reflect underlying order imbalances. In particular, even in the absence of bank funding strains like those seen during the GFC, a sufficiently high net demand for currency hedges could result in persistent deviations from CIP [covered interest parity]."

I agree that tighter balance sheet restrictions limit the ability of banks to facilitate the transactions that would narrow these basis swap spreads. In fact, I've argued that these restrictions affect a variety of markets in which banks play a key intermediating role, including the relation between sovereign yields and plan vanilla interest rate swaps.

As the BoJ and the ECB increase their holdings of JGBs and EGBs, I expect asset managers will continue to respond by replacing these holdings with debt issued by other sovereigns, in conjunction with cross-currency basis swaps. And I expect corporates will continue to issue in euros and in yen, swapping the proceeds into dollars.

But the specific parts of the curve involved will depend on relative pricing. For example, the graph below shows yields of Treasuries, Bunds, Gilts, and JGBs, all swapped into dollars. 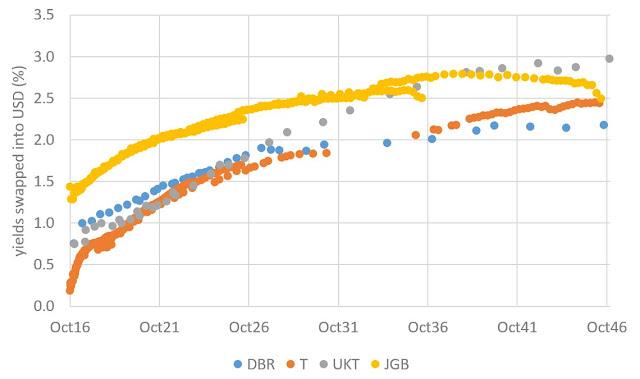 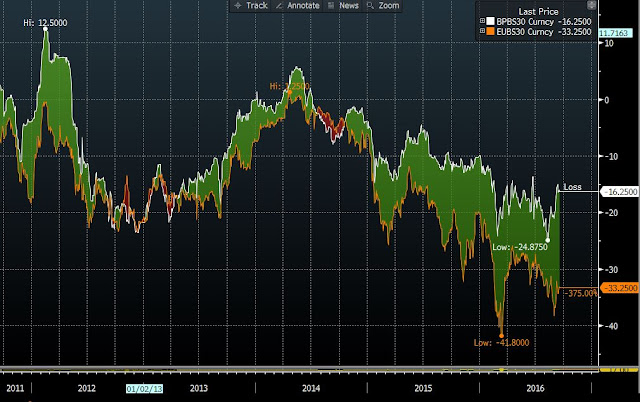 On the other hand, we see that swapping from JGBs to any of the other sovereigns in the 10Y sector is not advantageous. As a result, as seen in the graph below, the JPY/USD cross-currency basis swap in the 10Y sector has been narrowing relative to the EUR/USD cross-currency basis swap in the same sector, and I expect this trend too will continue while swapping from 10Y JGBs is disadvantageous. 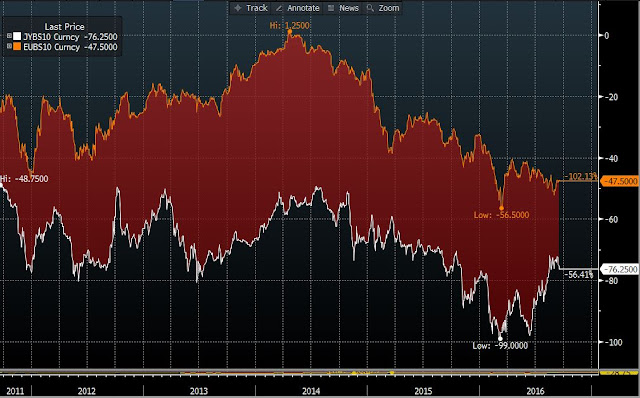 On the other hand, these cross-currency swapped yields are an important piece of the puzzle, and monitoring them is becoming increasing important as central banks continue bond purchases.
Posted by Doug at 1:11 PM