I was asked a few days ago about my views on interest rates generally, and I thought I'd share my post-Brexit update.

My bullish view is based on my standard framework for thinking about nominal rates as being the sum of real rates and inflation compensation, which I consider in turn.

The model I use for real rates is a straightforward consumption-based asset pricing model, standard in the finance literature. (See, for example, Consumption-Based Asset Pricing Models, by Rajnish Mehra.) In this framework, people allocate between consumption and investment each period so as to maximize their lifetime expected utility. One of the results is that real rates  in this framework are determined by three factors: time preference; consumption growth; and the demand for precautionary balances.

Time preference: This is typically considered to be a slow-moving quantity based on inherent preferences.  In fact, the bigger changes over time in this component may come from demographic changes. For example, it's probably no coincidence that real rates in the US were high when the baby-boomers were just graduating from college, when time preference is thought to be relatively high. But this component probably moves too slowly to have much relevance in a market call over a standard investment horizon of a few months to a few years.

Consumption growth: People who expect their consumption opportunities to grow over time typically can improve their lifetime expected utility by engaging in consumption smoothing via borrowing and lending. Since consumption growth most often results from productivity growth, the productivity growth rate is the critical determinant for this component. Productivity growth in the West has been low relative to its own history and relative to other parts of the world, in part because of low rates of investment, particularly in long-lived assets such as structures. Given the considerable increase in uncertainty posed by Brexit (and by the upcoming US elections), I believe investment is likely to weaken further in most Western economies, exerting further downward pressure on productivity growth and therefore also on real interest rates.

So overall, I expect real interest rates will decline further.

Inflation is notoriously difficult to model. But I'm generally persuaded by Milton Friedman's old adage that "inflation is caused by too much money chasing too few goods." Given my expectation that the UK is quite likely to experience a recession (or at least a quarter of negative growth) in the next few quarters, and my view that Europe is likely to experience at least a reduction in current growth rates (if not a recession), I don't believe either economy is going to be characterized by too much money chasing too few goods.

We might make a case that inflation in the US may continue increasing, particularly given the state of the labor market. But inflation dynamics in open, integrated economies tend to be correlated, as per the graph below, so I'm reluctant to forecast a different outcome for inflation in the US. Further, with the labor force participation rate so low, I suspect there's more slack in the US labor market than would be suggested by the 4.7% unemployment rate. 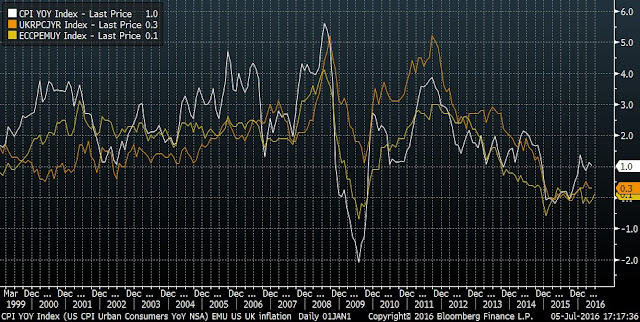 Of course, it's not unusual for spot inflation and inflation compensation to move in different directions, as seen in the graph below, showing the USD 5Y5Y forward inflation swap rate along with US CPI YoY NSA. 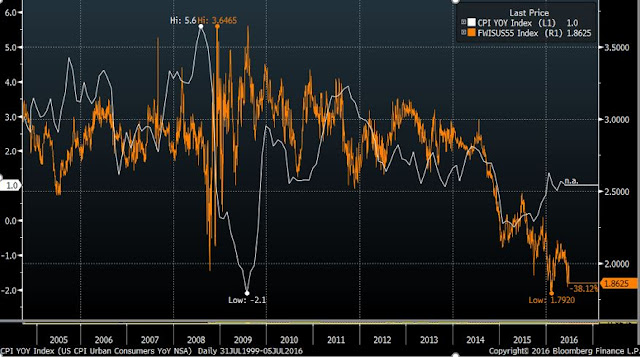 But note that the recent discrepancy has been for the inflation swap rate to decline relative to the spot inflation rate. My expectation is that a narrowing of this gap is likely to result disproportionately from a decrease in the spot inflation rate, given my views regarding growth in the largest segments of the Western economies.

So my expectation is that inflation compensation is likely to decline as well.

Of course, there are clear risks to this view. For example, we could experience another oil price shock (more likely related to supply than to demand), which would result in an increase in the inflation component. It could be that labor markets in some of these regions are tighter than I appreciate, leading to an increase in unit labor costs (particularly given low productivity growth rates). And currency depreciations can cause temporary increases in inflation in some markets (eg, Sweden and the UK). For example, my central expectation is that spot inflation is likely to increase in the UK for a few quarters to a few years, depending on the timing and the extent of the depreciation of the the pound. But I don't believe that will affect the longer-dated inflation compensation components, and I expect the rally in Gilts will continue over the coming months.
Posted by Doug at 6:46 AM